100 YEARS STRONG - THE TRADITION JAMS ON!

Today, the tradition jams on at the Mutual Musicians Foundation, located on the former site of Local 627 at 1823 Highland Avenue, in the heart of the historic 18th and Vine District. The Mutual Musicians Foundation, Inc., originally incorporated to manage the building and assets of Local 627, continued operating the building as a social club for musicians and fans after the merger with Local 34 in 1970. In 1979, the Foundation was prominently featured in Bruce Ricker’s film, “The Last of the Blue Devils.”

As we have since 1930, musicians gather at the Foundation Friday and Saturday nights after midnight to jam into the early morning hours. The Foundation also serves as a rehearsal space for members, a classroom for visiting students and a place for private parties. A living museum, the Foundation preserves and develops Kansas City’s rich musical heritage.

The Mutual Musicians Foundation International (MMFI) is dedicated to presenting the MMFI as an international hub utilizing the city’s most recognized international product; jazz solely for the benefit of its most treasured resource; musicians past, present and future.

The MMFI will increase the participation of ethnic, cultural/heritage based businesses and organizations within the overall marketing efforts of the cultural communities of Kansas City, create and maintain an international visitors center in the historic 18th & Vine jazz district of Kansas City. 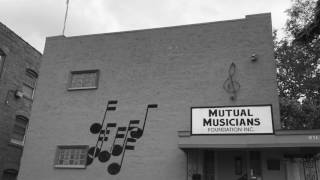